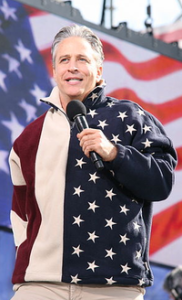 Who will sit behind Jon Stewart’s news desk to helm the empire he built? That’s what Daily Show viewers have been asking since Comedian Jon Stewart announced Tuesday—as though you haven’t heard—he is stepping down as host after 16 years.

“It is time for someone else to have that opportunity,” he told a surprised audience at yesterday’s taping. And while viewers are curious about what he’ll do next, even before the cushion on his chair had cooled, fans began speculating about who will fill Stewart’s role as cultural commentator and political/media watchdog and critic.

The blogosphere chatter is calling for a woman to take the lead. People are saying Comedy Central should step away from the tradition of male comedians hosting late-night shows in favor of selecting from an abundance of female comedians.

Vote for the next Daily Show Host!

Who would you choose from the list in this poll? I must stress the caveat; this is a short list from the amazing talent available. I tried to focus more on some familiar television personalities. I know there are many more women who would fit the bill (and leave you scrolling down for too long), including so many hilarious standup comedians who could/should be considered. Lisa Lampanelli comes to mind (too hard-core for Comedy Central?), but damn, there are so many talented women crowding the spotlight!

While I think the job should go to whomever is most talented and best suited to the influential role, it is my hope the new host continues Stewart’s long tradition of promoting new talent as he did with comedians such as Stephen Colbert, Steve Carell, Kirsten Schaal and John Oliver. (Yes, Kristen Schaal is not listed in the poll…only because I don’t think I could listen to her voice throughout the show every night.)

Vote here, and who knows…if enough people voice their opinion about who should fill this golden chair, perhaps Comedy Central’s decision will be swayed. Use #WomanDailyShowHost in comments here and other social media to show your support.

“I don’t have any specific plans,” Stewart said about what he will do when he leaves the show later this year. “Gotta lotta ideas; I gotta lotta things in my head. I’m gonna have dinner—on a school night—with my family who, I have heard, from multiple sources, are lovely people.”

As someone who is married to an evening news TV director, I know how his wife and kids feel about his daily absence. Most definitely, it is an unusual, untraditional lifestyle that takes some getting used to. I imagine Stewart will have to get used to spending more time with his family; kind of like how when busy professionals go on vacation and it takes a day, or so, to decompress and relax.

Use #JobsForJonStewart in the comments to say what work/project you think Stewart should tackle next.

There’s a long list of Daily Show fans in my family, and while we’ll be so very sorry to see him go, we wish him well in his future endeavors. Oy, he’s such a mensch!

If you feel strongly about one or another, or want to add to the list, tell about those additions in the comments and include #WomanDailyShowHost.